Federal Restriction on Type of AC You Can Buy

While it’s still 3 years away, a new government rule is already beginning to impact HVAC companies like our team at Tiger Heating & Air here in Corpus Christi, TX. And at some point over the next several years, it will affect you.

Air conditioners have always had an impact on energy use and the environment. For this reason, these systems face several federal regulations. From the type of refrigerant that can be used in them to how the units are made, the government has regulated air conditioners for decades. The rules on home air conditioners sometimes change, and are about to change yet again.

How will this new change impact you, your home, and your wallet?

Understanding what this regulation change is regarding efficiency requirements for air conditioners starts with knowing what the SEER rating is.

SEER =  Seasonal Energy Efficiency Ratio. It is a rating of efficiency for air conditioners. The SEER number for an AC unit indicates its energy efficiency. The higher the number, the more efficient it is.

TEXAS AC FACTS: Typically, the AC systems operating in homes have a SEER rating between 10 – 20. For those of you with much older air conditioners, you may have a lower SEER-rated unit. And those with newer ACs may have even have higher SEER-rated systems.

For decades, the government has set mandates for how low of a SEER rating is allowed. In 1975, the U.S. Department of Energy (EPA) set the first standards for the appliances and various equipment in your home. Then the EPA set it’s first SEER rating standards in 1987.

It’s important to note that the SEER rating standards often varied from state to state. Why? The temperature and climate of the different regions across the United States can be widely different. Those factors lead to determining what minimum SEER level your AC should have.

TEXAS AC REQUIREMENT FACTS: For all of us in Texas, the current federal requirement for AC systems to have a SEER rating of at least 14.

This SEER 14 minimum rating for home air conditioners in our region began in 2015. And soon, just 8 years after the last change, the EPA is raising the SEER requirement again.

Is Your Current AC lower than SEER 15? 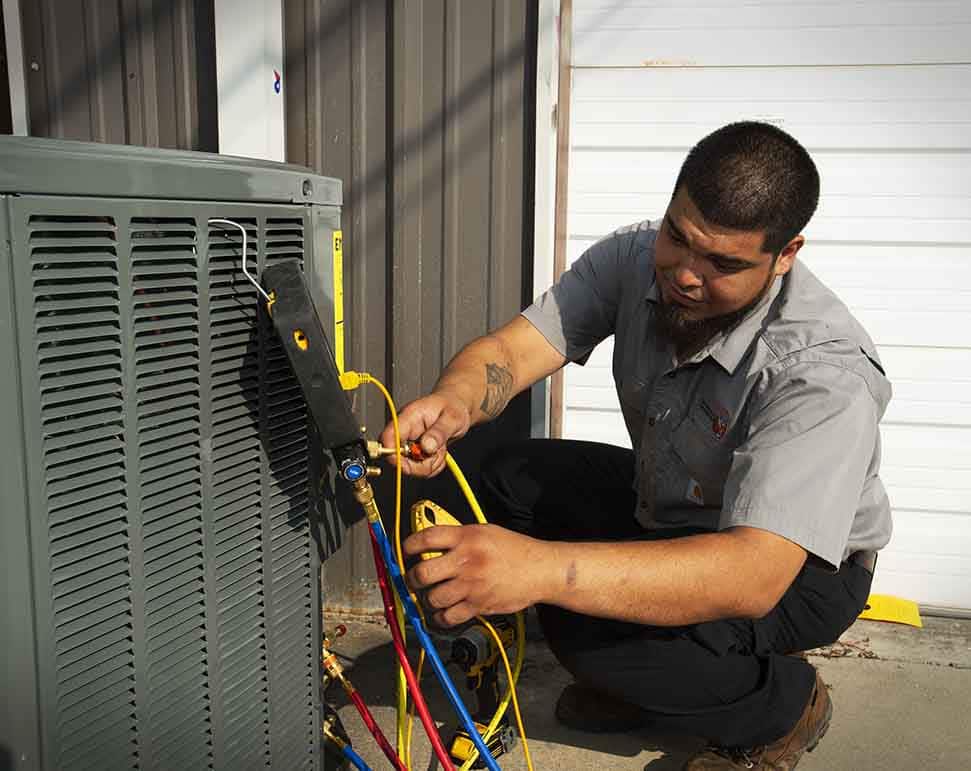 Don’t worry. You don’t have to suddenly get it replaced, not now and not even before 2023. The raised SEER requirement that is coming is only for new AC units that are getting installed. If your AC is older with a lower rating, you will not be forced to get it replace with a newer, more efficient unit (although there are many reasons why you should consider doing just that).

The new change to the SEER minimum coming in 2023 will not force you to have to do something immediately.

Who Is First Affected by the 2023 SEER Change?

It’s mostly us, the AC companies. Beginning in 2023, Tiger Heating & Air, along with every heating and air conditioning company in our Texas region, can no longer install an air conditioning unit with a SEER rating of 14 or less. The new federal regulation means all ACs we install will be SEER 15 or higher.

Because our climate varies widely across the country, it’s a different situation in other states. For HVAC companies in states further north, they do not have as high of requirements. For our northern friends, they will only be permitted to install air conditioners with a minimum rating of SEER 14 starting in 2023.

How Will You be Affected?

To put it simply, you likely won’t be affected by this regulation change. This SEER 15 minimum rule will only be a potential issue for homeowners who need to replace an aging cooling system on or after January 1st, 2023. If that happens to become your situation, you probably will still not be significantly impacted by the raised SEER standards. 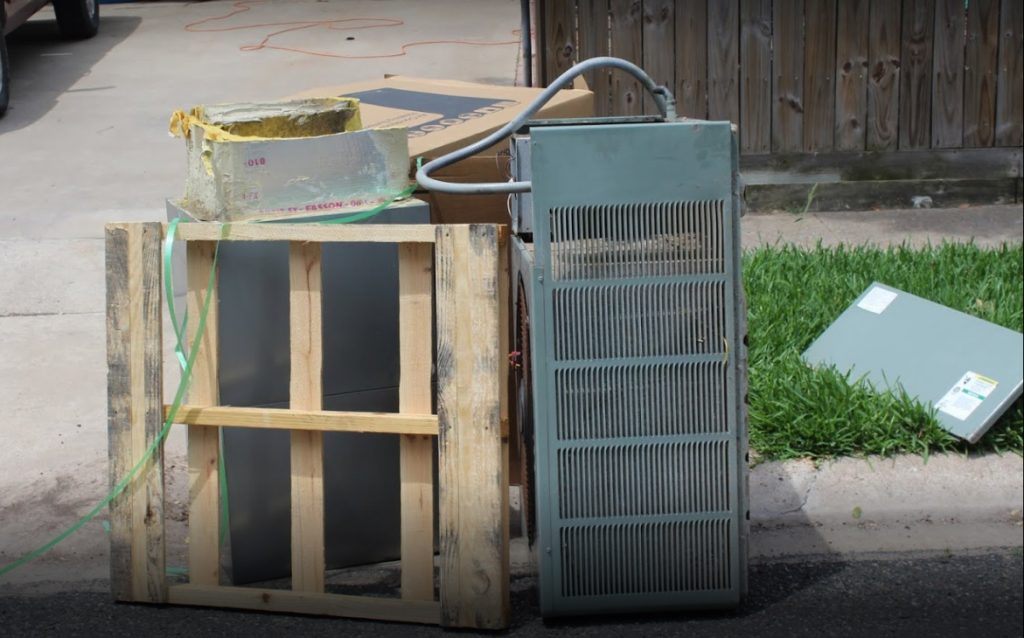 HVAC technology has come a long way over recent years. Not only do you have a wide variety of cooling systems to choose from, you have great and affordable options to increase your energy efficiency.

If your current AC breaks down and you do need one in 2023 (or even before then), there is a good likelihood that you will not even consider a system that is less than SEER 15. For not much of a price difference, you can buy an air conditioner with a high SEER rating that runs more efficiently and puts out more reliably cool air.

Rarely does a homeowner in Corpus Christi choose a SEER 14 (or less) air conditioner. When you hire Tiger for a professional AC installation, we’ll provide you all the information you need to consider the options and benefits of different systems. We will help you to determine the AC that is right for your home.

Why do most people already choose cooling systems with a high SEER? One reason people decide upon a higher SEER rating is that it will save them money. The amount of money you spend every month on your energy bills will be greatly reduced by a higher efficiency unit. Over time, you’ll see that the money you are saving on your monthly energy bills may even make up for the cost of installing a more efficient unit.

Bottom Line: The Impact of the 2023 SEER Rating Change

As we’ve explained, homeowners across the Corpus Christi area will face minimal impact with this upcoming regulation change. If you are working with a trusted, professional heating and air company, they’ll explain why a higher SEER rating is beneficial for you. This increased efficiency standard may force those who are reluctant to pay a little more for a better system.

The U.S. Energy Information Administration states that these increased standards for SEER will add up to a savings of $2.5 billion to $12.2 billion on energy bills during the first 30 years that the 2023 regulatory change takes affect.

Give us a call! With 3 generations of experience, our Tiger Heating & Air team is incredibly knowledgable on all the rules and restrictions regarding residential and commercial air conditioning systems. We are always happy to make sure homeowners know and understand anything that could affect them and their home. Call us at (361) 852-4450 or send us a message online, and we will take the time to discuss any questions you have. 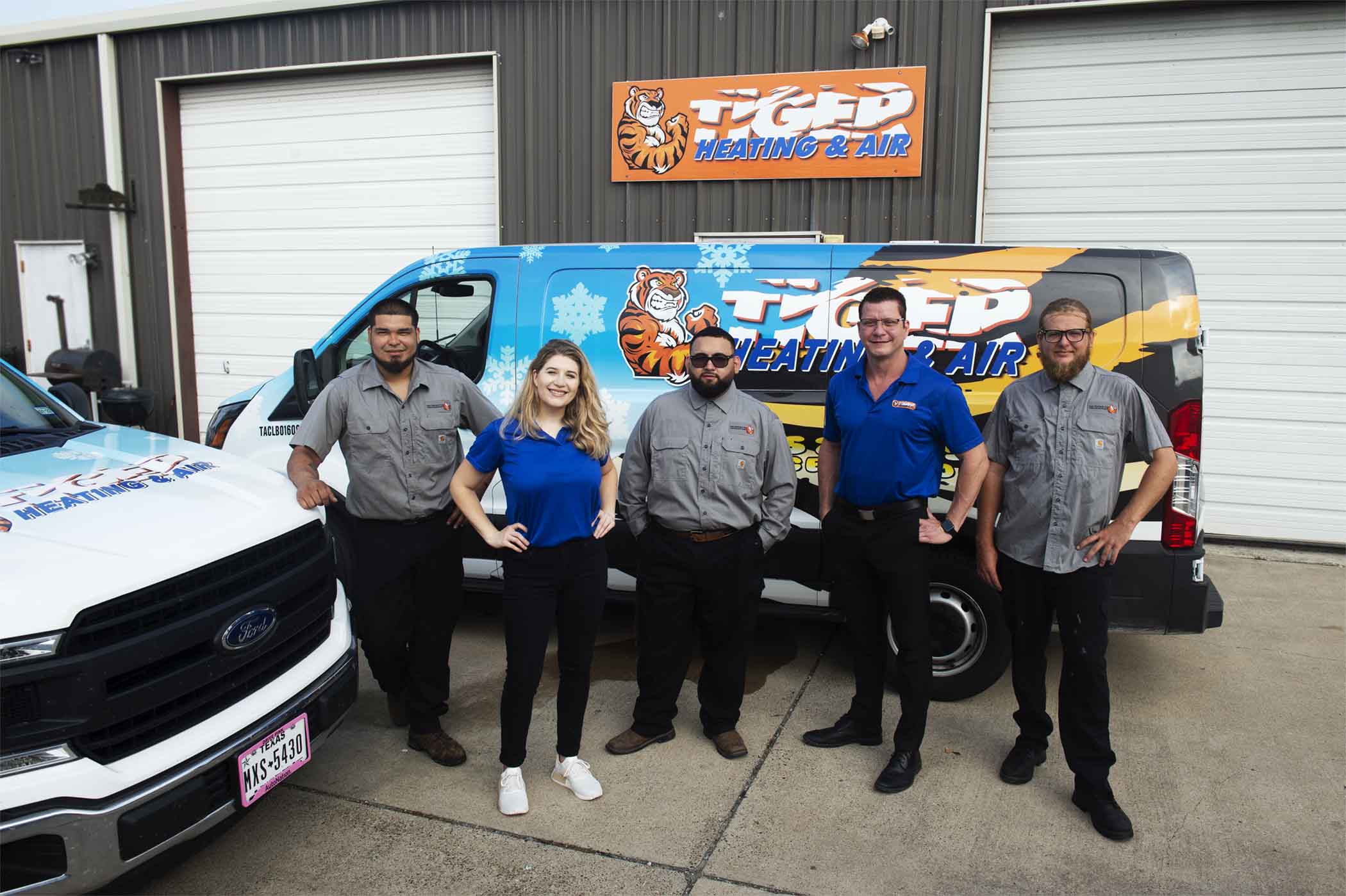 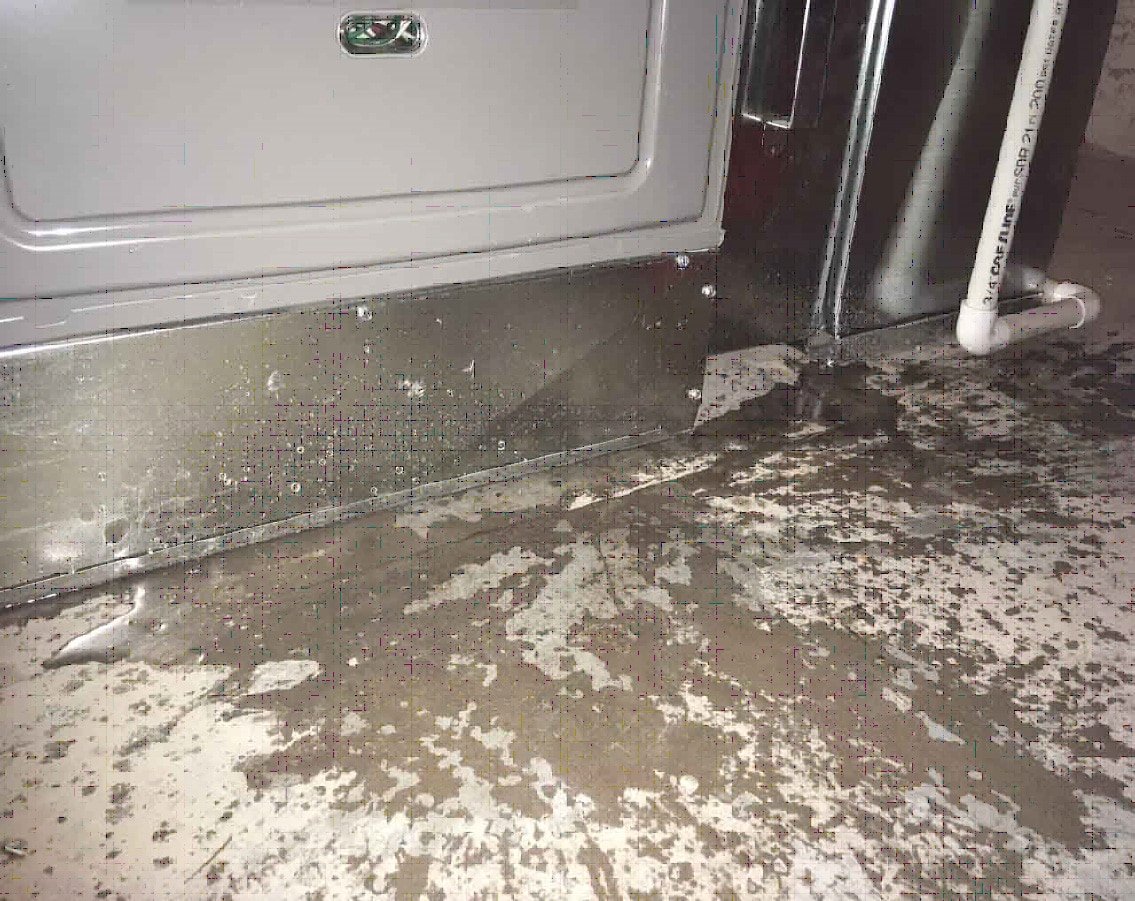 Over our Corpus Christi summers, your air conditioner is working day and night to keep your whole house cool. A well-maintained system that is not too old should be able to keep up with the demand to keep your home at a comfortable temperature. But problems still can happen.

Often people find out their air conditioner is broken or has problems by their home getting hot. But sometimes the sign of a problem comes in the form of a water leak.

Finding your AC leaking water can be a problem in a few different ways. Not only that, the leaking water may be causing damage to your home.  Whatever is causing the leak is often a problem that, if left unhandled, will cause whatever problem you have to become worse.

How do you know if you are dealing with a leak caused by your HVAC system? Usually the place where you notice the water pooling or dripping from is a good indicator.

Is water dripping from a ceiling below your attic?
Are you seeing drips come down from your ceiling? If this is occurring right below your attic where your HVAC system is located, then it could be coming from your AC.

Do you Need to Call an Air Conditioner Repair Company Right Away?

Not necessarily. While many problems that may cause an AC to leak do need to be handled by a professional, the problem may be something relatively simple to fix on your own.

If you feel capable of handling some level of basic HVAC repair, you can troubleshoot some of the possible problems causing your leak.

If you are not able to fix the problem yourself, you will need to call a professional technician. Here at Tiger Heating and Air, we have experienced air conditioning technicians who can handle repairs on any type or model of cooling system. Call us anytime for quick service at (361) 852-4450. We are even available for 24/7 emergency A/C service.

Understanding Why Water is Leaking from Your Air Conditioner

You need to first realize that your air conditioning system naturally is creating water. How? As it works hard to cool and dehumidify your entire house, moisture is pulled from the air and collects inside the AC system. All that water gathers into a drain pan then goes down a drain line.

Before anyone can fix the cause of this leak, we need to determine what exactly is causing it. Water dripping from your air conditioner could happen due to a few different reasons. Many of them do require a professional cooling company to fix. Some can be attempted by homeowners who feel confident in doing some more complicated home repair tasks.

If you try some of the basic troubleshooting steps and they don’t solve the leak, schedule a service call with Tiger and we will come out to determine the cause of the problem and get it fixed.

How to Prevent an A/C Leak

The good news is that an air conditioning leak can be prevented. Regular maintenance work done on your cooling system should reveal signs of problems early on. Catching issues early can prevent your system from breaking down or causing problems like water leaks to your home.

Call on Tiger Heating & Air for the maintenance you need on your air conditioning system. 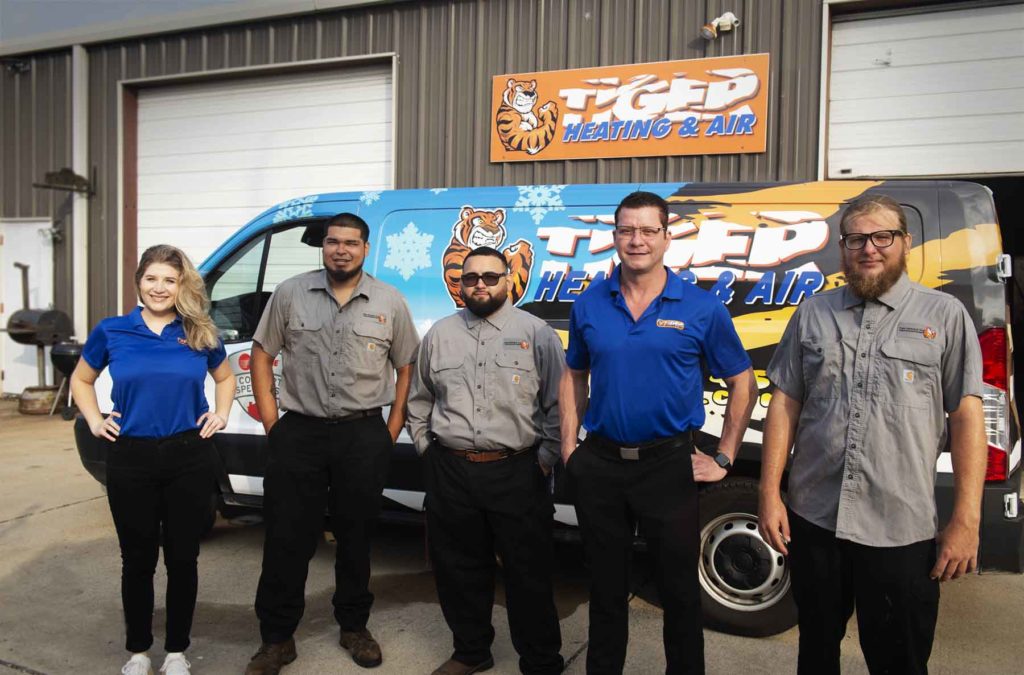 Tiger Heating and Air has been a trusted name in Corpus Christi since 1984. Whether it’s a repair, installation or maintenance, trust our team of experienced HVAC technicians to be ready to deliver the services you need. We are trained and experienced to service whatever type of heating or cooling system is in your home. We also provide professional indoor air quality services.

Get a free quote and see why we are the Corpus Christi company homeowners and businesses trust for honest and fair pricing. 100% Satisfaction Guaranteed!

We are located just off of TX-358. Heading south, take the exit toward Saratoga Blvd from 286 South. Turn left onto Saratoga Blvd, then 3 miles down the road, turn right onto Weber Rd and another right onto Wow Rd just across the street from the post office.